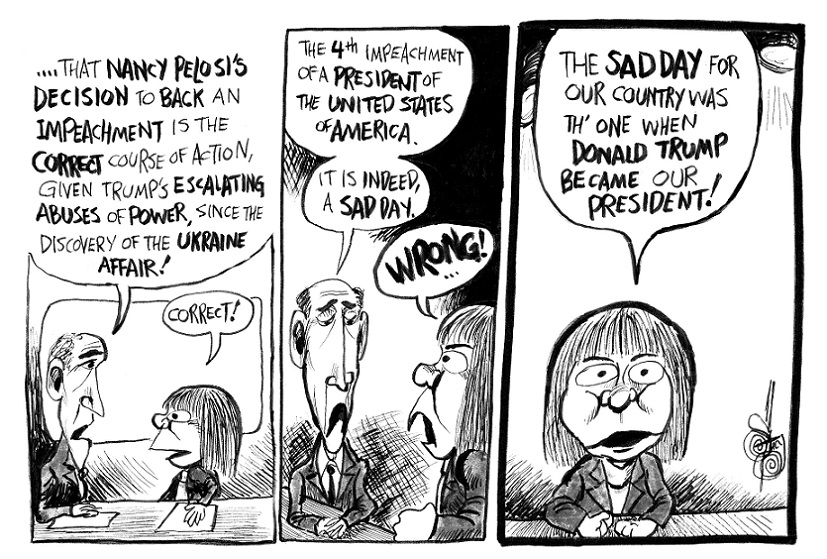 and the greatness has grown everyday since.

what has also grown seemingly exponentially is the irrational hatred of liberals and democrats, as this comic proves.

keep at it, if it makes you feel better.

but hate is a toxic acid. it poisons the hater even more than the object of the hate.
edit delete reply
mark stacy 15th Oct 2019, 10:02 AM
First off, the character Michelle above is more liberal than I am. I'm independent, though liberal-leaning. As far as irrational hatred by liberals, there's plenty of that to go around: the previous 3 presidents received plenty excess hatred, Clinton, Bush and Obama. Not that everything they did was OK either, but the vitriol wasn't pleasant. Trump himself is a hater (putting aside any possible bigotries), not just when he's "counterpunching". But I do give him credit where due: for example, up until recently, he did a good job fighting ISIS. And I find it genuinely moving that he honored his brother by not taking up drinking or any drugs; a brother that was dying of those things. I only wish that was the Trump (minus the personal tragedy) that's president right now. If it is, he's doing a masterful job of hiding it.

As far as your last sentence, I think Trump and some of his most ardent followers should learn that lesson themselves.
edit delete reply
Post a Comment