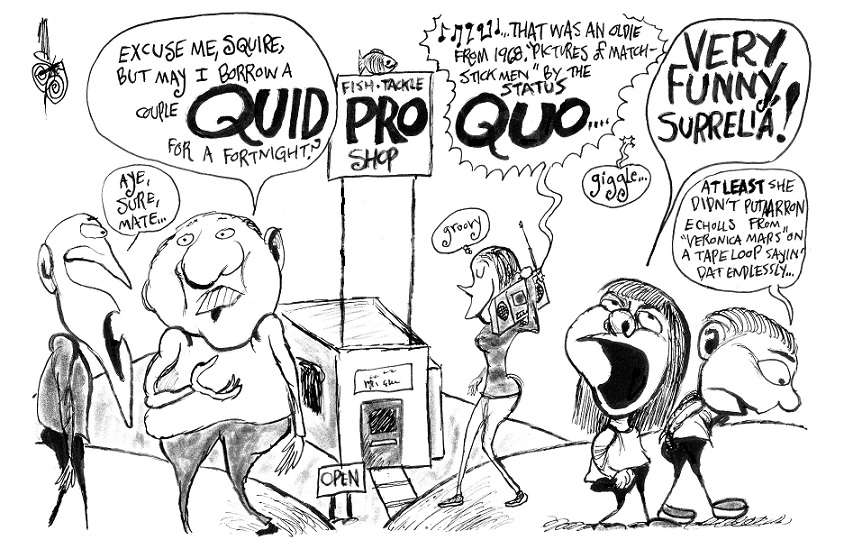 User comments:
guest (Guest) 9th Nov 2019, 6:51 PM
*sigh*… I suppose relapses are to be expected.
edit delete reply
mark stacy 11th Nov 2019, 9:00 AM
Not a "relapse", and I'm not your project to shape to your will. You can think what you want about Trump, but so can I. Not letting him take over the comic is a healthy thing at this point, but burying my head in the sand isn't.
edit delete reply
mark stacy 13th Nov 2019, 1:25 PM
Replying to a comment I deleted.
"Guest" (not even a username), or "concerned reader" (quoting Guest) I do deem some points worthy of a response, while others went too far, thus deleted. I mostly DIDN'T delete comments from this reader because I DO think differing opinion is fair game in replying to opinionated material like mine. I even replied to some comments perfectly rationally.

"And you're not my 'project'. You are only one of many comics that I read, mostly out curiosity."
It just seemed like You were trying to guide my work just a little too much. Like on the subject of the comic's title, which is a sort of umbrella title, where pop culture is an overarching theme, not the ONLY theme. Political satire is also one, going back to the Presidents' Club caricatures early on. Sometimes it's just the characters themselves driving the material. Michelle is, among other things, opinionated, liberal-left, and pugilistic. Bobby can get whiny sometimes (the "one sane man" trope turned out like that with him, and I noticed it).

"Nor am I trying to 'shape you to my will'."
Saying I, or the strip, "relapsed" because of a relatively mild reference to "quid pro quo" seems like I'm supposed to do things a certain way, according to you. As it is, I've let this experience affect what I put into the comic lately. To be fair, I HAVE let Trump "take over the comic" (as I used a phrase I've seen used elsewhere), and I need to correct that. After all, Doonesbury wasn't ALL talking White Houses (even during Nixon), and Pogo wasn't ALL political commentary.

"concerned reader"
I've seen some liberal editorial cartoonists draw worse visuals of Trump than I'd ever do. And I have felt that his immediate 3 predecessors got unfair criticisms a lot (though I'm certainly not uncritical of them at times).

At any rate, I'm probably going to wind down "Pop Culture's Kids" in favor of coming up with a new comic. The current storyline is leading to a climax anyway. It'll likely just be on hiatus, in case I have more ideas for it later.
edit delete reply
Post a Comment