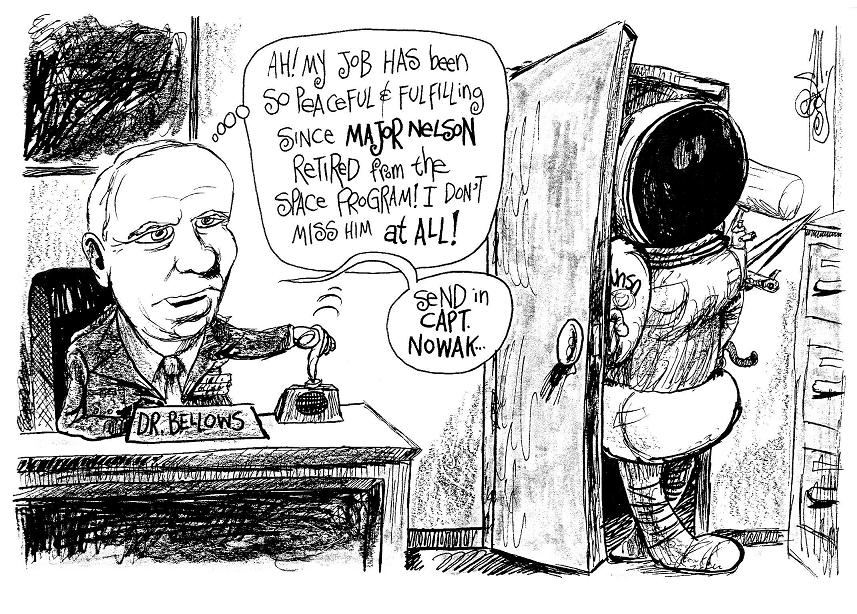 2nd Sep 2012, 7:33 AM
Rate this comic
Author Notes:
mark stacy 2nd Sep 2012, 7:33 AM
From 2007. Another one using pop culture to comment on current events. The current event in question is about the female astronaut who had the crazy adventure going cross-country wearing a diaper. A natural for "I Dream of Jeannie" foil Dr. Bellows, just when Maj. Nelson's out of his hair.

I made the file for this from a "color" copy of the cartoon in order to capture the gray tone from a marker-type pen. The copy shows the gray much better than the uploaded version, either from copying it from that source, or just working the black (and china marker shading in this case) while making the file to the detriment of the gray. Either way, I had more success making a file from a copy of a comic/cartoon where I drew the gray right on the copy, then scanned that.

Last entertorial (for now) in this series tomorrow, then the epilogue on Tuesday. Also, back to Monday-Friday schedule after that.
edit delete

User comments:
Ooraffum (Guest) 2nd Sep 2012, 10:12 AM
If you scan in b/w, you're just getting one of the color plates instead of a true greyscale scan, so scan in color and change it to greyscale in your editing program.
edit delete reply
Post a Comment